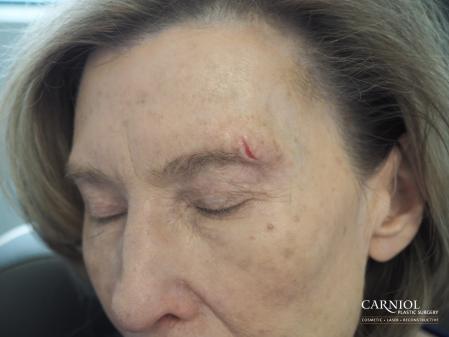 This patient fell and cut her lateral eyebrow. SHe was seen elsewhere and was treated. However, at 1 week, she was so unhappy with how it looked. An in-office scar revision was performed. 3 weeks later her family can barely tell it is there.  Her online review of the experience: "From the moment I walked into his office, I knew I was in the most competent and caring hands. He explained in detail what I had crushed internally and what he could do to make a much nicer scar. AND... he did just that the very next day. During the procedure, he was gentle, once again explained every step of the process, and instilled such optimism in me that I would be pleased. A week later he removed the external stitches and I really could not believe the result.... and then he spent so much time advising me on what I should do to even further minimize the scar visibility. Now... three weeks later, my family and closest friends and, most importantly I personally, don't even notice the scar. He is a truly amazing doctor from every aspect... the words that come to mind are 'trusting, genuinely caring, expert in his field (the best of the best 'gold standard'), and so patient with his patients (I ask so many questions.)! I normally don't write such extensive reviews but Dr. Carniol and his office deserve so much recognition and my personal heartfelt appreciation."

View ThumbnailsAdd to Favorites
Powered by: